There are undoubtedly collectors of ancient coins who can not understand why these are a fine style coins.

However, the brilliance of the designs can easily be lost on the jaded modern viewer who is inundated from the earliest age by images of all types drawing from thousands of years of artistic and commercial endeavor.

It may be difficult to appreciate how stunningly new these designs were to the history of world art.  How extraordinary it must have been for ancient merchants to have witnessed for the first time,  Mythical Beings: Heroes, Gods and Goddesses, whom they could only have seen in public buildings temples and shrines presented in this new medium.

These artists who engraved these images did not only have to wonder:  How should we present Zeus?  What posture should he assume?  What emotions should be invoked by those beholding him?

But also: How to effect this on a little oval piece of Electrum?

Now, undoubtedly houses of the wealthy, as well as temples and other public building were adorned with Mythical Images.: sculptures and paintings.  But engraving in metal was certainly a new artform.  And these coins are amongst the first metallic engravings.

And certainly these are the first artworks that were, in effect, mass produced and disseminated throughout the ancient world.

That  doesn't mean, of course, that every single Electrum image is a masterpiece.  Some are undoubtedly clumsy.  Some perhaps altogether botched.

This one, for example doesn't do much for me.  It looks more like a chicken than a Siren.

But others are true masterpieces that use the confines of the oval and the substance of the metal to achieve miniature sculptures to rival those of any period by any artist. 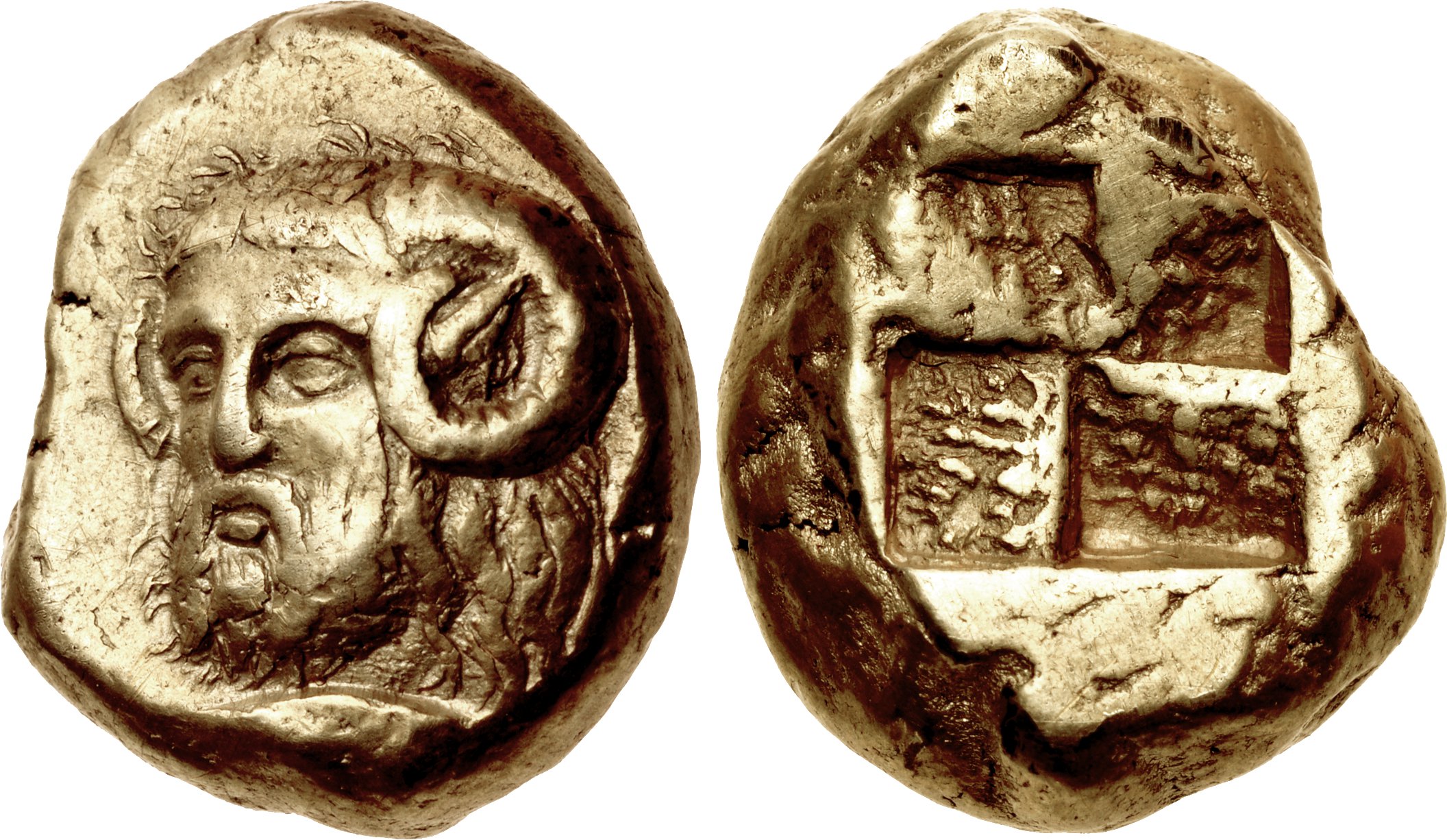 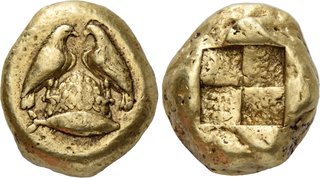 Some, like this coin, endeavor to evoke an entire mythological story To quote the catalogers at  CNG : This rare type depicts the legend of the omphalos (navel) stone, which marked the sacred precinct of the sanctuary of Apollo at Delphi as the physical center of the earth. According to tradition, two eagles, which had been released by Zeus, one flying from the east, and the other from the west, met exactly at the site of Apollo’s sanctuary.

Some artist - or group of artists - had to select this myth and then hash out the best way to depict it in this new medium.  How to relate an entire myth with all its associated meaning on a little oval of electrum?

To really appreciate the brilliance of this design you have to consider that most other designs from this period in similar mediums - seals, scarabs, jewels, consisted of signs and image that were much more standardized.: A beatle, a lion, an ibis etc - whose forms had been well established for centuries.

That doesn't mean, of course, that there aren't  beautiful scarabs and seals from this period and earlier, it simply means that this new art from should be appreciated in light of what must have been the equivalent of what would be considered as groundbreaking avant-garde genius in our own era.